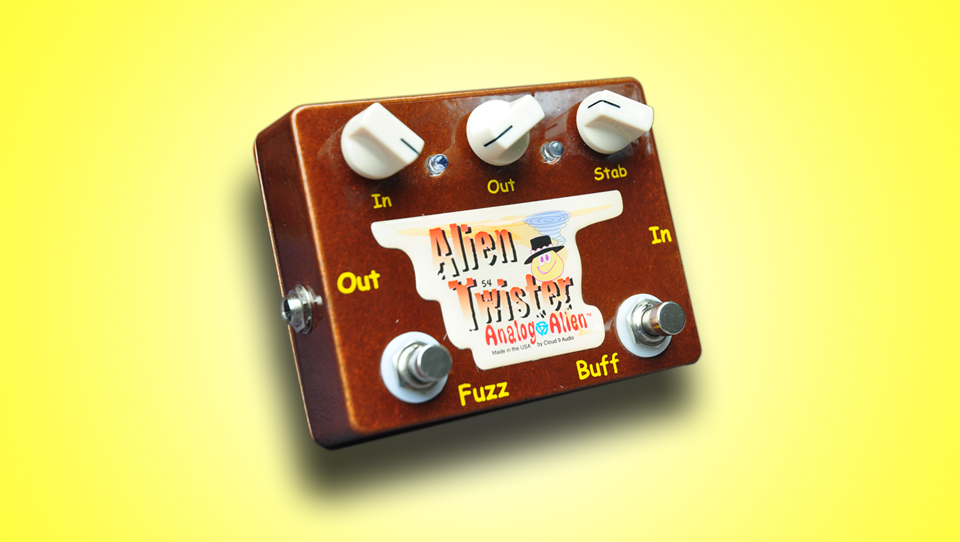 The Alien Twister  has touched down, and according to preliminary reports it has all the makings of an F-5 Tornato! The Alien Twister is a Fuzz, Distortion, Overdrive pedal  with a built in buffer. The Twister comes in a cloth satchel and is packed in it’s own branded wooden box and includes a bottle of Chips favorite Hot Sauce. With an output  that reaches unity gain at 10 O’ Clock this pedal has plenty of power to blow the doors off  of all your favorite venues. You can purchase the Alien Twister from one of our authorized dealers or directly from the Analog Alien website.

The Input Control adjusts the level of the signal that is sent to the input of AT and is a very handy feature to have on a fuzz pedal. It not only makes the AT more versatile, but when combined with the stab control, it offers you, the guitarist, a greater spectrum of tonal possibilities.

The Output Control sets the amount of output signal that is sent to your amp. Let me warn you that the AT has a lot of output gain – a lot! It reaches unity gain at 10 O’Clock!

The Stab Control adjusts the amount of voltage that is sent to the final transistor stage of the Alien Twister. Turning the Stab Control counter-clockwise to the left decreases the voltage. The more this control is turned to the left, the more the notes will tend to splatter and will have less definition. Turning the Stab Control clockwise to the right increases the voltage level. The result is a stronger sounding fuzz with lots of sustain and greater note definition. The sensitivity of this control depends on how strong your pickups are and how you set the input control on the AT. The Stab Control works hand in glove with the input control. Both can be adjusted to allow you to go from a thick vintage fuzz to a full rich distortion, and finally to an expressive overdrive.

You may have read or heard about placing a buffer in your signal chain, but what is a buffer? A buffer is a simple preamp circuit that has a high input impedance and a low output impedance. The buffer adds no gain to the signal, but by converting the impedance from high to low, it gives the signal the strength it needs to make its way through long cable runs, as well as through the circuitry of the other pedals that you may have in your signal chain. A well designed buffer, like the one in the Alien Twister, will accomplish this without loss of tone or signal level.