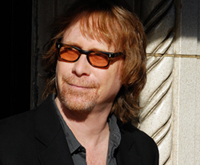 === ===== === === ===== === === ===== === === ===== === === ===== ===
Bill Mumy is an American actor, musician, pitchman, instrumentalist, voice-over artist, and a figure in the science-fiction community. His most notable role was in the 1960s CBS sci-fi television series Lost in Space, where he played Will Robinson, the youngest of three children in the Robinson family. He later appeared as lonely teenager Sterling North in the 1969 Disney film Rascal with Steve Forrest. In the 1990s, he had the role of Lennier in the syndicated sci-fi TV series Babylon 5, and also served as narrator of A&E Network’s Emmy Award-winning series Biography. He is notable for his musical career, with an Emmy nomination for original music in Adventures in Wonderland (1991), as a solo artist, and as half of the duo Barnes & Barnes. He has written and recorded songs with America, toured with Shaun Cassidy, and played in Rick Springfield‘s band in the film Hard to Hold. [website]