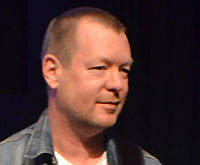 === ===== === === ===== === === ===== === === ===== === === ===== ===
Brett Kingman is a professional guitarist based in Melbourne, Australia. He has spent time touring and recording with Australian icons such as James Reyne, Daryl Braithwaite, Ross Wilson, Renee Geyer, Joe Camilleri, Vika & Linda Bull, Peter Andre, Jenny Morris and dozens of others. Brett has toured the world supporting acts such as Tina Turner and Robert Palmer and is also a well known identity at international music trade shows such as NAMM and Musikmesse. Brett also produces demonstrations for the ProGuitarShop channel based in Portland, Oregon in the United States, and writes for Tone Report Weekly, an internet publication that is fast becoming a reliable reference for guitarists the world over. [website]