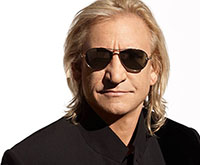 Joe Walsh  is an American singer, songwriter, composer, multi-instrumentalist, and record producer. In a career spanning more near 50 years, Walsh has been a member of five successful rock bands: the Eagles, the James Gang, Barnstorm, The Party Boys, and Ringo Starr & His All-Starr Band. As a member of the Eagles, Walsh was inducted into the Rock and Roll Hall of Fame in 1998, and into the Vocal Group Hall of Fame in 2001. He has also experienced success both as a solo artist and prolific session musician, being featured on a wide array of other artists’ recordings. In 2011, Rolling Stone placed Walsh on its list of “100 Greatest Guitarists of All Time.” [website]