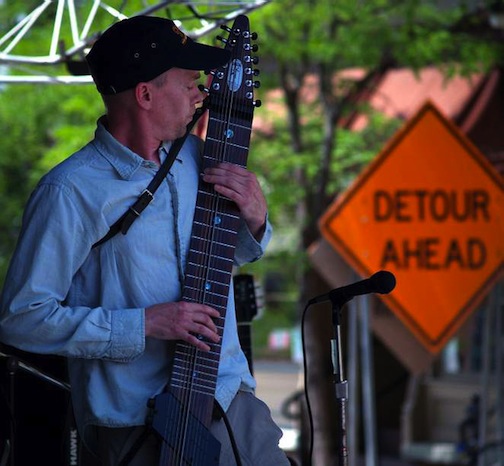 Jason Brock has actively pursued his career as an emerging “stick player”. Presently, he has been performing in his home town of North Bay, Ontario, where he was born and raised. Jason has attended and performed at 5 international Chapman Stick seminars. He has been taught and recognized by some of the world’s best known Chapman Stick players. Jason has been playing music professionally including countless weddings, concerts, restaurants, clubs, galleries, parties, as well as performances for hospitals, community social programs and fundraisers. Jason also graduated from Canadore College May 2004 with a diploma as a Social Services Worker.

In the official review of the Historic 2002 Mid-West Stick Seminar (Michigan) taught by veteran Stick players Greg Howard and Bob Culberson, Jason was named as one of two outstanding students of over thirty participants.

His first CD Medicine Stick (independent home recording) has 21 original compositions ranging across several genres (Celtic, contemporary, light jazz, progressive, and folk) and a playing time of 1 hour 15 minutes. It has sold very well at his live performances and has resulted in very positive feedback.

In 2006, Jason was recognized by Emmett Chapman as one of two outstanding performances in Emmett’s official review of the “First National Stick Festival” concert in Ann Arbor Michigan.