The Alien Twister has touched down and has all the makings of an F-5 Tornado!
The Alien Twister is a fuzz, distortion and overdrive pedal with a built-in buffer. With an output that reaches unity gain at 10 o’ clock, this pedal has plenty of power to blow the doors off of all your favorite venues. And to keep you hungry for that tasty Analog Alien tone even after you’ve put the guitar down, this fuzz/buffer pedal includes a bottle of Alien Twister Hot Sauce.

Scroll down for more sound clips! 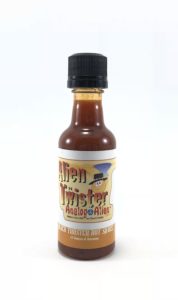 Alien Twister Pedal:
• All-analog fuzz/buffer pedal for great fuzz tones
• Input knob gives you control of the amount of signal sent through the pedal
• Fuzz switch gives you convenient stomp in/out access to effects
• Stab knob defines the articulation and sensitivity of the fuzz tone.
• Buffer switch converts a high impedance input to a low impedance output and can be used to affect fuzz for more tones
• High-gain Output knob sends your tone to the amp or mixer
• Works with a 9-volt battery (included) or optional power supply (not-included)
• Comes in a branded wooden box and includes a bottle of Alien Twister Hot Sauce

Control over input and output flavors your tone.
This pedal lets you control what comes in and what goes out to make sure you get just the tone you want. Where you set the Input control determines the amount of signal sent from your guitar to the input of the pedal, giving you tons of versatility. The Output control hits your amp and hits it as hard as you need; but be warned, the output reaches unity gain at its 10 o’clock setting and is piping hot!

Stab slices and dices for tonal definition.
All pedal-heads love the Alien Twister’s Stab control. Use this knob to dial in your definition. Turn it to the left for a decrease in voltage that builds you a buzzing wall of tone, or adjust it to the right for a bite of articulation and sustain that leaves an aftertaste. And since stab controls the amount of voltage sent to the final transistor stage of the pedal, you’ll discover perfect fuzz, distortion and overdrive tones when you use it along with the Input control.

Buffer circuit serves up signal and tone.
The buffer circuit on the Alien Twister is a simple preamp that changes your high impedance input to a low impedance output – strengthening your signal without adding gain. The buffer’s high-to-low impedance conversion feature doesn’t lose your tone or rob you of signal. It is perfect for matching impedances on your vintage gear, playing through the other signal-hungry pedals in your chain, or getting your tone to the end of a long cable run. And since the buffer circuit is completely independent from the rest of the pedal, you can use it to affect your fuzz tone. You’ll have even more awesome tonal options to cook up within the same pedal.

How to use the Alien Twister pedal:

Input – the Input knob adjusts the level of the signal that is sent to the input of the Alien Twister (AT). This is a very handy feature to have on a fuzz pedal. It not only makes the AT more versatile, but when combined with the Stab control, it offers you, the guitarist, a greater spectrum of tonal possibilities.

Output – the Output knob sets the amount of output signal that is sent to your amp. Let us warn you that the AT has a lot of output gain – a lot! It reaches unity gain at 10 o’ clock.

Stab – the Stab knob adjusts the amount of voltage that is sent to the final transistor stage of the Alien Twister. Turning the Stab control counter-clockwise [to the left] decreases the voltage. The more this control is turned to the left, the more the notes will tend to splatter (having less definition). Turning the Stab control clockwise [to the right] increases the voltage level. The result is a stronger sounding fuzz with lots of sustain and greater note definition. The sensitivity of this control depends on how strong your pickups are, and how you set the input control on the AT. The Stab control works hand-in-glove with the Input control. Both can be adjusted to allow you to go from a thick, vintage fuzz to a full, rich distortion. And, finally, to go into an expressive overdrive.

Buffer – a buffer is a simple circuit that has a high input impedance and a low output impedance. The buffer adds no gain to the signal, but by converting the impedance from high to low, it gives the signal the strength it needs to make its way through long cable runs (as well as through the circuitry of the other pedals that you may have in your signal chain). A well-designed buffer, like the one in the Alien Twister, will accomplish this without loss of tone or signal level.

There are no reviews yet.